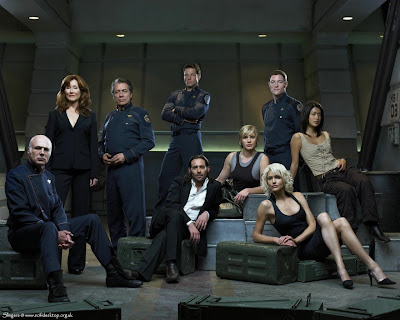 I've been excited for a week. The whole frakkin cast of the great and awesome Battlestar Galactica (that's the NEW RE-IMAGINED version, Doug!) will be on Letterman tonight. They are just supposed to be doing the "Top Ten List", but if we're lucky, maybe some will sit and chat (by that I mean Katee Sackhoff.... I'm dying to know what is next for her after they wrap the final nine episodes.....Ugh, it's so painful to even say that. "Final episodes." [incoherent grief-filled blubbering sounds])

P.S. to Alice: So I get to Orlando on April 4th - which date just happens to be the first episode of Season 4. How about we all sit on Karen's couch and watch it together? Karen isn't initiated yet, but I have faith.