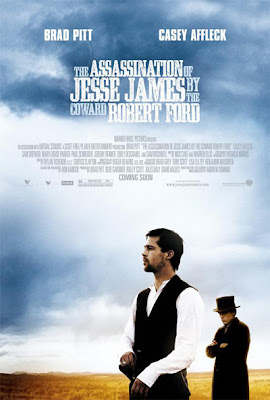 This is a really great film. And the more you know about cinematic storytelling the greater you will think it is. From the aspect of craft, Assassination is beautiful in all of the aspects that matter: writing, direction, performance, score, cinematography, production design, sound design. (That is, each of its parts its whole, harmonious and radiant (ie. communicative), and then the amalgamation of the parts is harmonious.) And then from the aspect of world-view, the film radiates a powerful and universal truth. Even more rare, the film manages to integrate theme into the method of storytelling, most notably in the style of dialogue and cinematography. And it has lyrical imagery! And it even uses ambient sound to highlight the theme! Watching this film, my critic cup ranneth over.

The subtextual title of the film could be: "Living in Sin." The film illustrates the destruction wreaked in human lives from habitually living in a state of spiritual rebellion....in a really funny way sometimes. My friend and I were laughing very loud at times at the absurdity that becomes the life of the person who, as St. Bernadette says, "loves their sin." But way beyond just showing the banality of living in a committed relationship to evil, Assassination does a cool thing in making the point - particularly through the style of dialogue - that human beings trying to live out the Genesis lie "you shall be like God," end up as transparent and ridiculous phonies. It was really cool. BTW, the film is based the book of the same name written by the very smart and committed Catholic writer, Ron Hansen. Of course, I came home and ordered the book immediately as I'm sure one out of every two viewers will too.

Where to start? Okay, how about the cinematography.... 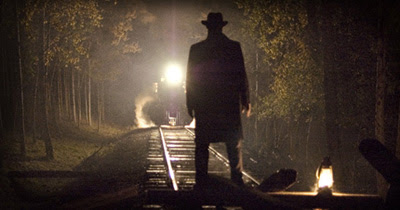 Beautiful frames all the way through. The pallet is frequently colorless...just like the fruits of sin. And then, several times, they did this really cool thing of showing landscapes through a narrowed lens that was clear in the middle but fuzzy all around. It seemed to me that living in sin similarly distorts a person's moral, spiritual and even intellectual vision.

There were several breathtaking images - the bucket (of iniquity) running over, the fades to the blackest of darkness, the Darkened doorways - but my favorite was "the wheat and the tares." I say no more! Just love it when you see it. 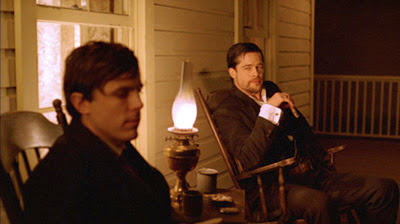 Everything they are saying about Casey Affleck stealing this movie from Brad Pitt is true. ("Wow," I thought, "Someone in the Affleck family has genuine talent." It's so nice when something in the hype of contemporary life turns out to be authentic.) Casey is great in this movie. I was wondering if being in the shadow of the lesser talented big brother Ben contributed to Casey so ably fleshing out a resentful man in another man's shadow. But anyway, he perfectly inhabits the idol-worshipper who alternately is facinated by and hates his idol. It's delightful to watch him because he is so good.

Brad too is great here, spot on in fleshing out a person who has chosen to begin his hell on earth. He is paranoid, perpetually exhausted, emotionally unstable, and frighteningly unpredictable in his rages and cruelty. He is definitely a human being though, who yearns to love and be loved, but he is a human being caught on the underside of a large snowball rolling down a mountain. He can't stop the momentum of his own evil choices.

The supporting players are also wonderful, most notably the guy who plays Liddel. He was fabulous as the mysogynist who rolls out pretentious dialogue.

But a discussion of casting and supporting players leads to one of the two missteps in the film, this one being a huge misstep. Did I say huge? Because I meant HUGE!!!!!!!!!!!!!. Who had the unbelievably inappropriate idea to cast fire-breathing Democratic partisan James Carville as the Governor of Missouri? As my friend said, "They just demolished the fourth wall with a nuclear weapon." Terrible, stupid, distracting call. In a tableau of wonderful performances, Carville was stiff and weird, regurgitating lines that sounded like they were being read off a tele-prompter. And this was particularly egregious because the governor's character has a key line in the film that underscores the narrative's essential theme. I think "casting James Carville" is going to replace "jumping the shark" as a new euphemism for doing a stupid thing just because you can.

The other misstep in the film had to do in almost everything in the movie after Jesse James gets killed. They were rushing around trying to do to much and ended up splashing the subtext all over the page. The filmmakers needed to lose about fifteen minutes of this film, and it should have been all the moments in which they made Robert Ford have to tell us how he felt about killing Jesse. It was so much better in the rest of the film in which we could wonderously find the clues and put them together. 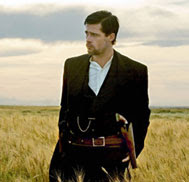 But overall, this is an Academy Award worthy piece in many categories - acting, directing, cinematography and writing minimally. It's the first really Oscar-worthy project I've seen this year.

(But I'm wondering why we aren't seeing more raves about it everywhere. And I haven't seen one TV ad. It can't be that because next year is an election year, the attention and the Oscars just have to go to the crop of anti-war propaganda films, can it? I hope not, because that would be an injustice to this piece that deserves plaudits.)

Assassination of Jesse James By the Coward Robert Ford is a must see for movie-loving grown ups. (The violence here is harsh without being voyeuristic. There really isn't a lot of it, but it might be too much for kids. There is no sex, but there is some lewd talk appropriate to the theme.)

P.S. Go here for a much more thorough review of the technical elements of the film.