Another Act One Alumni Movie! 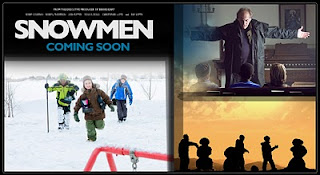 Well in case you were wondering — finally — there are SNOWMEN in the forecast!

SNOWMEN was one of 5500 entries and the only family film of the 85 films selected.

Below are all the screening times, location and demographic breakdowns for Tribeca. Would love you to pass along and invite any friends/family/associates/Studio Execs/wealthy investors/fans/facebook stalkers etc who might be in the greater NY area.

Saturday, April 24, 2:00 pm, SVA 1 333 West 23rd Street (between 8th and 9th Avenues) New York, NY 10011 (Silas): Seats 479 In competition for the “Audience Award”. This will be our “premiere” screening and will have Ray Liotta, Josh Flitter and Bobby Coleman(other cast TBA) in attendance. We need this screening to be filled! A small private party is TBD.


Thursday, April 29, 2:30 pm Village East Theater 3 Village East Cinemas (VEC) 181 Second Avenue (at 12th Street) New York, NY 10003: Seats 155. In competition for the “Audience Award”. Rob Kirbyson will be in attendance. This screening is a smaller setting for those who would benefit from a more intimate experience of the film.

INTERVIEW:
The festival put up a transcribed interview with Rob on their website. (The festival is tracking hits to this link so every click counts. Thanks!)

Meet Robert Kirbyson, director of the TFF 2010 family film Snowmen, a sweet movie that is one of the few TFF 2010 films perfect for families!