In my strange new role as #1 fan in chief of the Sci-Fi Channel's re-imagined Battlestar Galactica, I dutifully took my place today at the NBC studios in Burbank at a special day of striking solidarity for Sci-Fi writers in conjunction with the Writers Guild of America strike. As I have noted before, I really don't know anything about the whole Sci-Fi universe, and so I found myself surrounded by lots of fans for shows with names like Eureka and Stargate Something as well as members of the casts and crew of these and other shows.

I was there solely and completely for Battlestar and had the chance to talk to the Executive Producer, co-Executive Producer and several cast members (although not Katee Sackhoff as she didn't show up....rats.) I had an interesting exchange with the co-exec producer, Jane Espensen about my little ethical issue with the show. (Ref. a post in mid-January. The whole "What is the difference between humans and cylons thing.) Very interesting. Jane agreed with me that Laura Roslin should have gone ahead and stolen the election because she had enough empirical evidence to know that Baltar was very very bad. Imagine a TV show turning me into a situation ethicist! Anyway, it was great to be able to thank them for the show and tell them how much it has entertained me...and given me a lot to think about.

Anyway, I thought it was very much in keeping with the spirit of Ash Wednesday to go picketing for peace and justice in Hollywood.

Here is a shot of the show-runner of Battlestar, Ron Moore with one of the stars, Michael Trucco, who plays Starbuck's husband, Sam Anders. 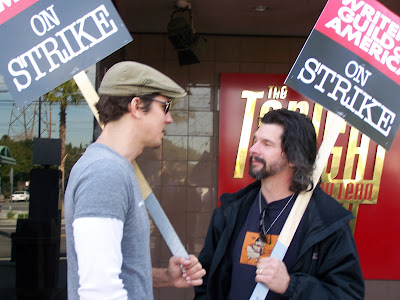 Here is Ron Moore with actress Kate Vernon, who plays Ellen Tigh, the wild and weird wife of Colonel Tigh. 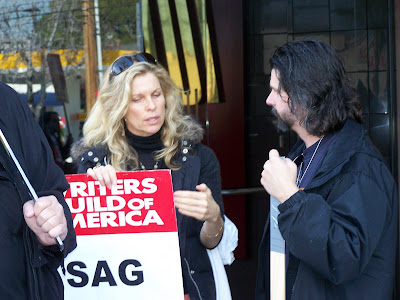 Here are a group of female sci-fi writers. There are writers here from most of the Sci-Fi Channel shows, and they were all wearing pink hats for some reason. (I guess if I knew more about sci-fi, I'd get it....) Anyway, there in the middle of them is my friend and Act One TV instructor, Sheryl Anderson. 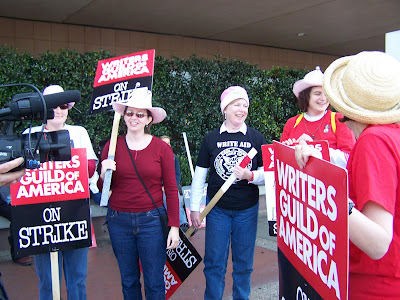 I was staring right at Sheryl when I first got to the strike, but I didn't recognize her because I was staring at her hat. Suddenly, I heard my name, "Barbara Nicolosi!" It took me a minute because I hadn't seen her for a year and it was out of context, (and then there was the pink hat!) but then it was so nice to give her a big hug and spend the next hour or so tromping back and forth catching up. Sheryl currently writes on Flash Gordon, and we are hoping it will be coming back when the strike is resolved.

Here's Trucco and Kate walking the line. As a writer, I am so grateful to the SAG community for their support in this strike. We won't forget! 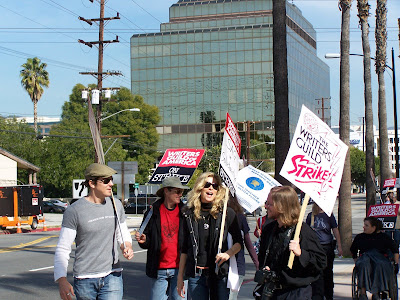 Here are photos of some other Sci-Fi stars. I know they are stars because the paparazzi were all over them at different points in the day. If anybody knows who they are, please feel free to let me know.

UPDATE FROM THOM PARHAM, CHRISTIAN SCI-FI GURU OF GURUS: "The guy on the right-hand side is Mark Verheiden, a co-executive producer on BSG. I've known Mark since I moved to LA in '95. He's a great guy and helped me arrange interviews with some of his colleagues for a Popular Culture Association conference paper I wrote a few years ago." 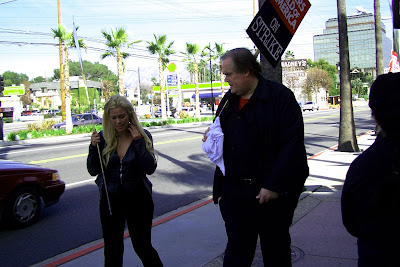 UPDATE FROM D.: "The guy in the red shirt and black jacket holding the strike sign is Jamie Paglia, the writer / co-creator / EP of Eureka." 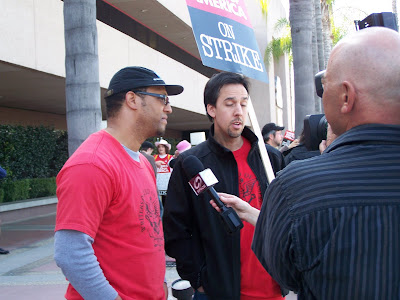 UPDATE FROM THOM PARHAM: "The guy being interviewed by Space (the Canadian counterpart of Sci Fi Channel) is Ed Quinn, who plays Nathan Stark on Eureka. Don't know if you've seen it yet; Think Northern Exposure in a town full of geniuses. Give it a try sometime. 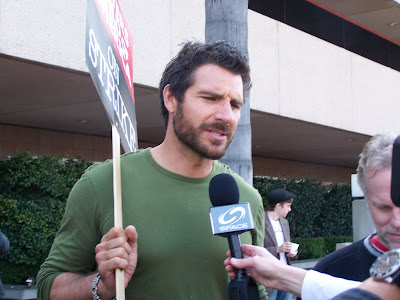